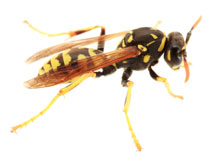 Although there are hundreds different types of wasps, the most common wasps are the Papernest wasp, Yellow Papernest wasp and European wasp. These wasps have similar habits and generally you need a well trained pest controller to tell them apart.

The European wasp is most easily identifiable by its black and yellow body, yellow legs and triangular markings on the abdomen.  While the European wasp is the same size as the bee (10 - 15mm), it is less hairy and folds it's wings back at rest.

Signs of Wasps in and around the Home

THE EUROPEAN WASPS hold their legs close to their bodywhen flying. They fly quickly and do not hover. Their nests are rarely seen and are usually below the ground. Nests are round or football shaped, with an outer covering of insulation.
They are large and grow in summer to be the size of a basketball or bigger. Although normally wasp nests are in the ground, they may be found in a wall or roof cavity. The nest will have a busy entrance hole with many wasps entering
and exiting per minute.

European wasps will sting repeatedly and will attack humans. It is hazardous to approach the nest, so do not attempt to treat the nest yourself.

CALL SOUTHCAPE PEST MANAGEMENT who will organise for a technician to treat safely and effectively.

THE PAPER WASPS are often seen hovering around bushes or over lawns.  Their back legs dangle down during flight.  They eat caterpillars and rarely will be found near meat.  Their nests are often seen and are usually above the ground.
The nest is a single flat layer of papery honeycomb cells which are usually grey in colour, but often with white capped cells. The nest is the size of a golf ball but may be as large as a dinner plate. They are usually found under fence capping or roof tiles,
under eaves and in dense shrubs, or in hollow steel and piping.  Paper wasps will sting and can sting repeatedly if you approach the nest during the day.

CALL SOUTHCAPE PEST MANAGEMENT who will organise for a technician to treat safely and effectively.

At Southcape Pest management we understand the habits of each of the many species of wasps found in the south-west. We use that knowledge when developing a control program for your home.